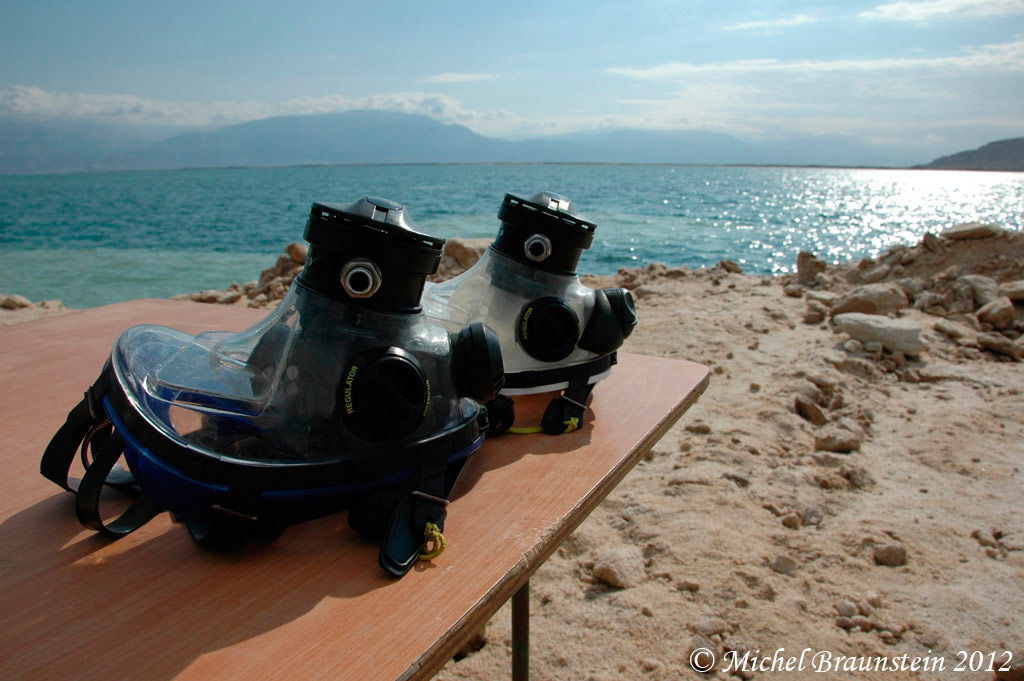 Diving in the Dead Sea must be done with a face mask to protect the eyes, face and mouth from unfavorable waters. We organized a first dive with a face mask in a pool a few days before the date of the dive. When that day came, my dive buddy and I met the instructors. We were equipped with our 5mm wetsuits. After a short briefing and a refresher drill in the use of masks, we climbed down the few salt encrusted rocks that still separated us from the sea. 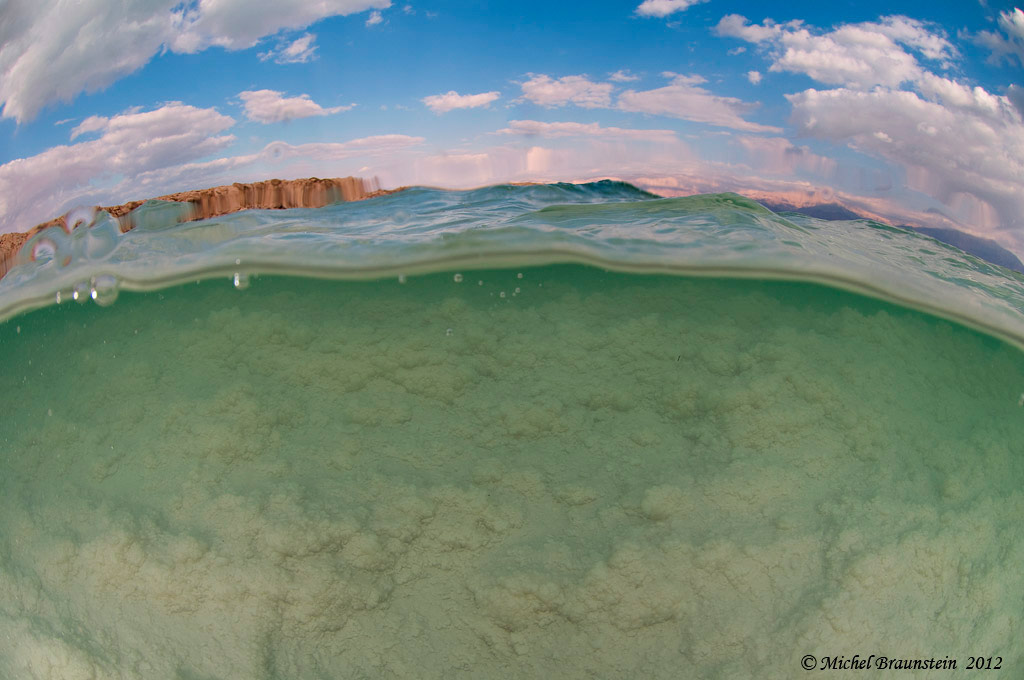 We put on our heavy weight belts, BCDs with complements of lead around the waist and even added weight in our pockets, which felt really full and very heavy on the front of the body. It was not too comfortable. We placed our impressive face masks on. It was important to remember not to get even one little drop of Dead Sea water in the eye, because it is very distressing, which I found out later. We got in for a first dive to get used to the challenging waters of the Dead Sea. 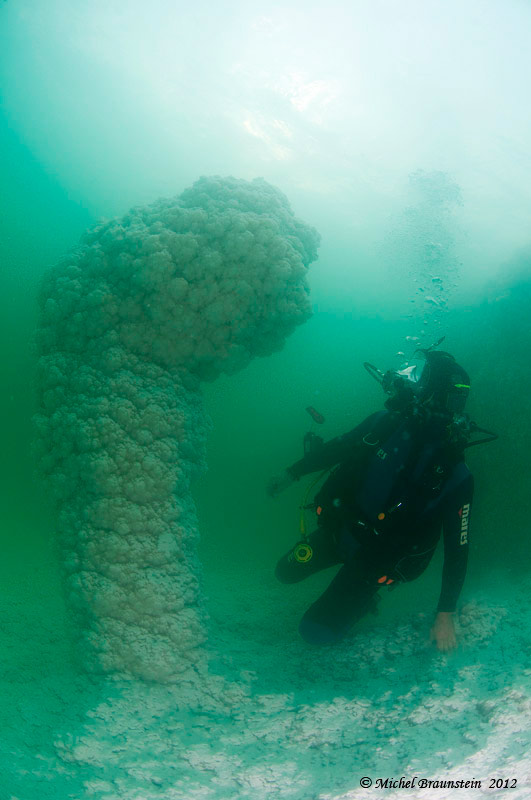 It was not easy to descend, despite all the weight. It was also not easy to find around in these dense waters. We were rapidly reaching eight meters deep. Being an avid photographer, I sized up the best angle on a tall pillar of salt for later, when I would come back with my camera.  It was just my luck, then, that a drop of salty water seeped into my mask and into my left eye. This was not a pleasant experience. I couldn’t open my eye, and I couldn’t do anything underwater to repair the situation. So, I signaled to the instructor, and we went back to the surface. After rinsing my eye with fresh water, I felt much better, and we returned to the water to finish this first dive. Here, there are no corals as I am used to seeing in the Red Sea or in other warm seas. There’s no life, just field after field of white salt, the color of bleached coral. Sometimes a salt cathedral would break up the relief. Sometimes walls of a canyon or a cave appeared. But certainly, it was an other-worldly underwater landscape and a unique experience. 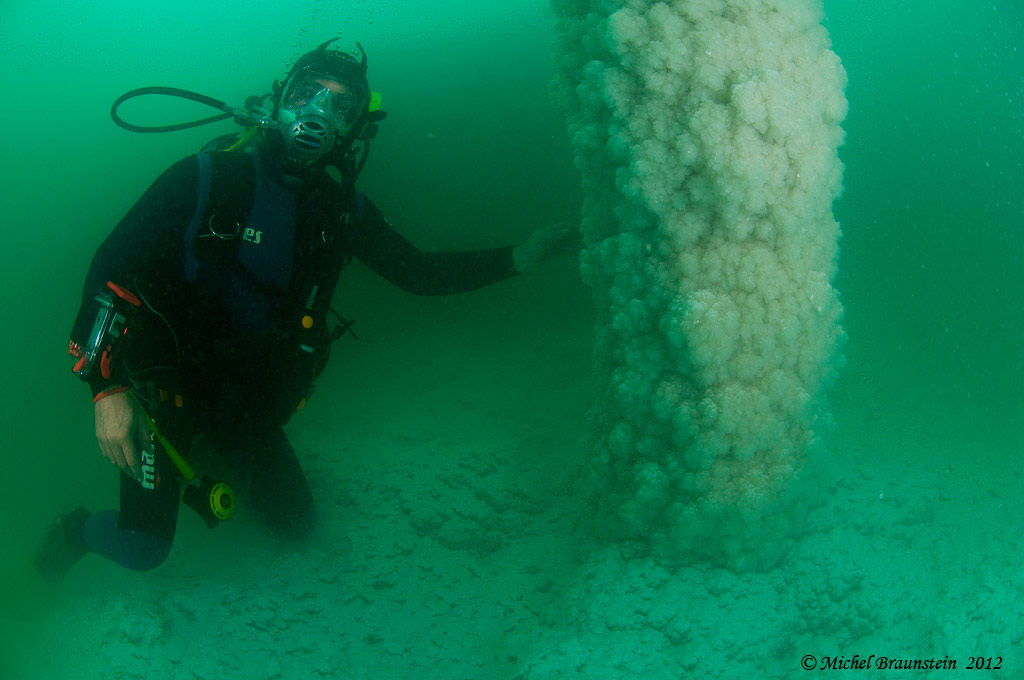 The Dead Sea is an internal Sea of  60 Km length and 18 Km width, located between Israel, the Palestinian Authority and Jordan. It’s divided in two parts, the “North Sea,” and the “South Sea,” called “Pools.”

Dead Sea is the second saltiest place in the world: 33.5% versus ocean 3.5% – Lake Assal in the Djibouti crater is the saltiest with up to 40% salt density.

The Dead Sea is located at the lowest point on the earth below the sea level, today (2013) -426.5 meters while in 1948 the Dead Sea level was -396 meters. It’s not the only time in its history that the Dead Sea is at such a low level. In 1000 BC, the sea level reached almost the same level as today. The northern part of the sea depth reaches 350 meters.

The low level of the sea is due to evaporation of the water. When there is hard rain, water is diverted for domestic and residential, industrial, or agricultural use in this drought-stricken part of the world. Once there were many sources below the Dead Sea which “fed” the sea with fresh water. Most of those sources are used today for local populations, cultures and industry.  This explains the fast evaporation. In the Northern Sea, there are still some fresh water sources coming out from the sea’s underground. This can be seen in the following clip filmed by scientists at Ben Gurion University, at minute six, when you can see water coming out of the ground:;http://youtu.be/MHLiobkTUd0 . You can also search for the following words in Youtube: “First Scientific Diving Expedition at the Dead Sea”.

Because this is one of the hottest places in the world, there may be 4oC water temperature variation in just a few hours in the shallower depths. Water temperature is around 18oC in January and varies between 28 and 35oC in August. 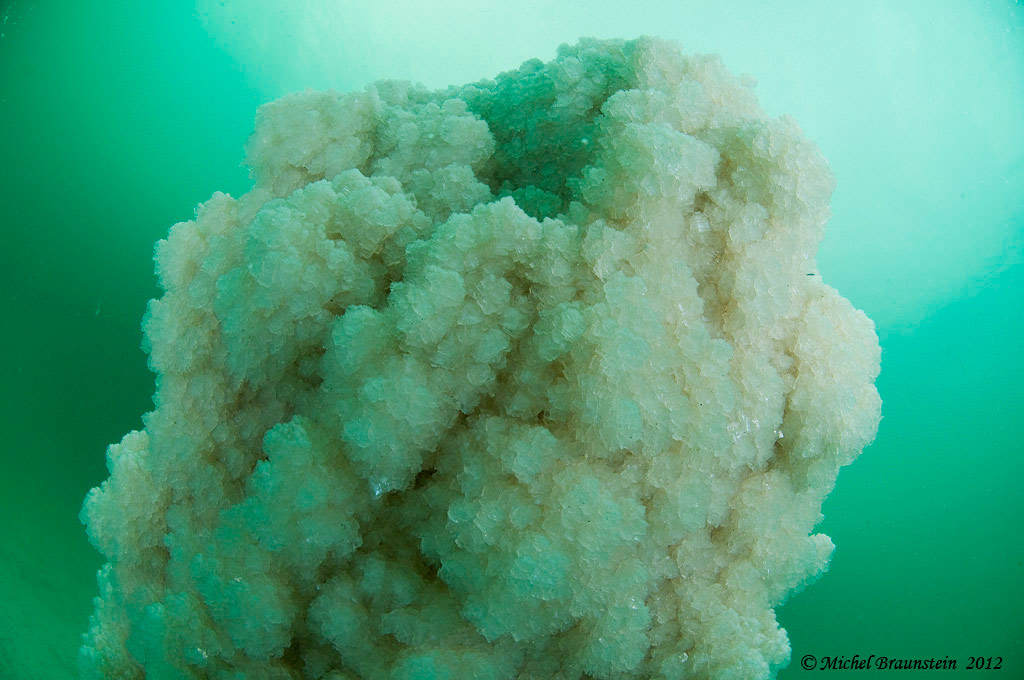 When you are at the Dead Sea level, it’s as if you’re 3 meters below the ocean water surface. The depth gauge gives a precise depth with only a slight error you can easily correct. Each meter of water is 1.3 atmospheres. At 10 meters below the surface, you will see 13 (pressure at 10m) + 3 (pressure at sea level) =16 meters. Dive computers must to be configured to -3 meters before the dive.

Depending on the dive depth and time, you must take up to 4 hours break before taking the car to climb up to high altitudes. 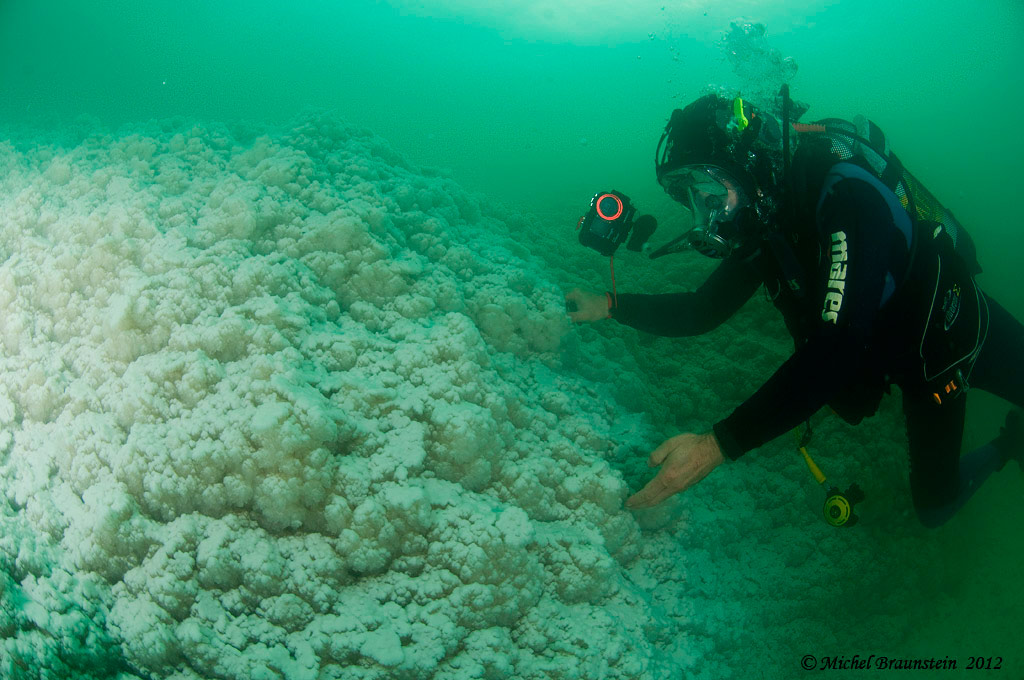 Some caves have been discovered but they are relatively deep. They can be accessed only with the help of a boat, which makes the operation more complicated.

Dead Sea diving is physically not easy and it demands some preparations, like learning to use the full-face mask in a pool. It’s quite expensive, and must be considered as a project.  However, it’s a very challenging, extreme and unforgettable diving experience. 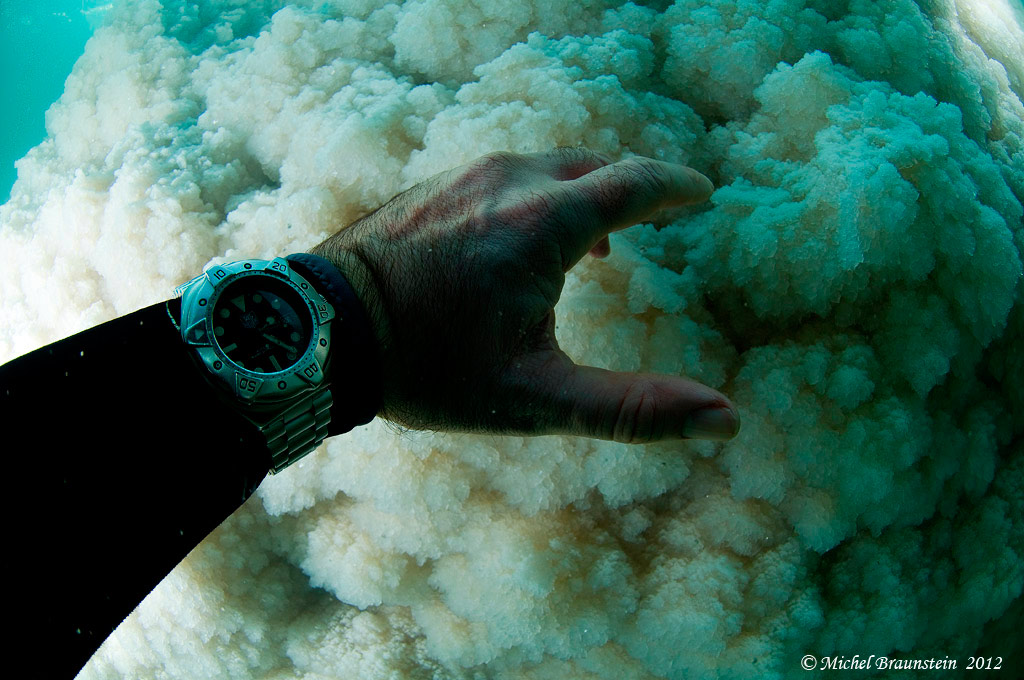 How to organize the dive?

“Dead Sea Divers” is the only company which organizes dives in the Dead Sea. They have almost 15 years’ experience diving there. They instruct you, they provide the necessary equipment and they guide you all along the dive. www.deadseadivers.com 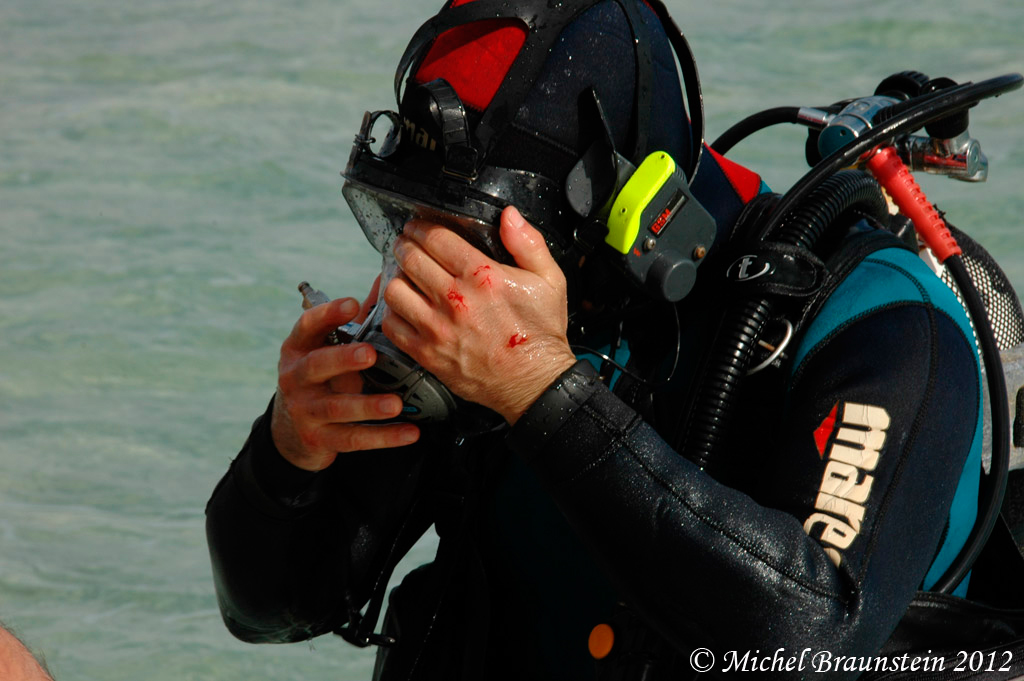